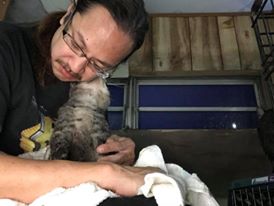 Recently, I found myself in a strange state of not having a home yet not being on the streets. I was pushed-out of my rental home and given two days notice a new home would not be ready on my move date. I ended up in Motels.  I called it being ‘effectively homeless’ based largely on the financial term ‘the effective interest rate’ which makes things that are unequal, equal for the purpose of familiarity and comparison. I am not on the streets yet I have experienced some psychological and emotional trauma of not having a home. So in effect, I am, in a way, homeless. This was only supposed to be 4-5 days, not going on 4 weeks.

I am very thankful to those that have funded the motels – without them I would be on the streets for sure with no family here locally and work hours that would make even the kindest couch surfing hosts shudder – but I have learned some things through this experience that I do want to share.

In Part One of “Effectively Homeless” I discussed the condition, the background, and some of the new challenges I faced initially.

First a status report: I should be out of the Motel 6 and in my new home by Thursday August 9th. There are still some logistical and financial challenges ahead between now and then. As of today, Friday July 27 2018, the current financial need is $186.05. If you want to donate towards this need you can visit http://paypal.me/careycat and give to an account that is on file with the Motel 6.  I appreciate and am thankful to those who have donated once, twice and more times than I can count.  I need to hit $186.05 to finish out at the Motel 6 and related needs.

Needs: There is still a pile of debris that needs moved. The first attempt to remove it felt short and all my money was taken in that attempt. If anyone knows anyone who can help remove the debris and take it to the dump or another location please contact me. This has to be removed ASAP. Dump costs are very high for this pile apparently. Most metal / scrap metal has been removed.

I wanted to dedicate this blog to “lessons learned” while “effectively homeless”.  As my degree is in the social science discipline, I tend to observe, collect, and analyze behaviors as well as look for correlations. This includes my own experiences.

For the longest time I questioned ‘why this happened’. A friend reminded me I should be asking ‘what is it I am trying to be taught or should be learning’ from this experience. There will be a third post coming soon. Stay tuned. God is good and he is sovereign.