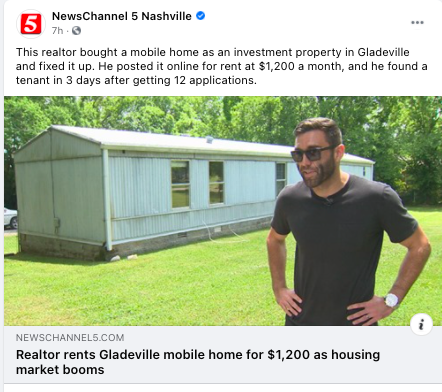 Newschannel 5 posted a story about a realtor that rented a mobile home for $1200 after receiving 3 offers. The article was included in a few posts by Newschannel 5 as well as an expanded post discussion by Nick Beres of Newschannel 5 on his Facebook page.  The initial response by Facebook users on the Newschannel 5 article were largely highly critical of the realtor. But I think I have an understanding shaped by experience and wanted to write about it.

Having been through a housing crisis of my own 3 years ago, I wanted to have a bit of a discussion about this. This will not be an inverted pyramid type article or a research type article, just an open discussion.  It is much more loosely constructed than my usual writing. It is highly disorganized, has no structure or flow to speak of, but I do believe it has value.

About 3 years ago I was pushed out of my home when it was sold to an out of state investment company. It was saga where I had advisement by 3 attorneys all of whom felt I did nothing wrong – but in the end it was a losing battle. It’s a similar battle that I believe many tenants will face when the CDC Moratorium on evictions expires this summer. I was presented with a 30 days to vacate notice which was issued illegally and subsequently withdrawn, followed by more odd actions that made little to no sense outside of a motivation to get me to leave, and finally a notice of non-renewal. It couldn’t be more clear the company wanted me out. The home was prime as far as I could tell based on location.

I was living in Madison, TN about 3 minutes from an I-65 ramp and a prime location overall. I ended up relocating to a trailer situated on an acre of land. I had it renovated to make it livable and should have the kit n kaboodle paid off in about 2 years. From the get-go I understood the trailer wasn’t worth anything, it was the land it was sitting on. That was the mantra from day 1. The Newschannel 5 story was a thrill to me because Luke Blackwell, the realtor involved in the story, validated my point of view.

The Newschannel 5 article included a quote from Luke Blackwell: “For me as an investor, I can haul it off. The trailer’s not really worth anything, it’s more like the land,” Blackwell said. Realtor rents Gladeville mobile home for $1,200 as housing market booms. The quote was good, but many took it out of context on Facebook.

The Facebook response was swift on the Newschannel 5 story. Some felt Mr. Blackwell was price goughing, while others felt the trailer rental was representative of greed. One person replied they “Wouldn’t mind a cute landlord though…lol.” Another person questioned paying that much for a trailer. I have not cited actual authors of the quotes since quotes can be edited and making screen shots of each one would be tedious but you get the general idea. The value of a trailer however isn’t one dimensional.

The first value as a trailer I estimate to be zero. It’s basically worthless. At least mine is as it was from the 1980’s. It’s depreciated down to zero. Compared to a ‘stick built’ house, a trailer has no value where as a stick built home goes up in value over time. The value is in the land. The land value is where the tax assessment places the most weight. Unless something happens to it – and that’s why you have insurance.

The second value is to the insurance company. Mine for instance is $14,000. It will always be $14,000. There’s not much I can do to change that. You can insure for that value plus a percentage but at the end of the day, it’s worth what it’s worth to the insurance company. It’s more like a vehicle than a stick built home. But it’s still just sitting there unless you are renting it out.

Finally there’s the value of the trailer as a single family dwelling that can generate revenue over time to cover and exceed the initial investment. This is what I call the rental real estate value. In rental real estate much like general real estate, it all comes down to location, location, location. I live 13 minutes from an I-65 ramp, the schools are good around here and I sit on 1 acre of land which is a good middle ground between having neighbors and not having neighbors. To me that is worth a $1200 rental and if I put it on the rental market that’s probably the value of the trailer as a rental. However it may be easier to express it another way.

As a rental you can look at it as an equation: Purchase Price + Renovation + Maintenance – Rent over 5 years = Profit. So if you pay $33,000 for a trailer on property, spend $33,000 on renovations, $5,000 on maintenance over 5 years, and collect $72,000 in rent over those 5 years ($1200 monthly for 5 years) then your profit is $1000 over the course of 5 years and can be augmented if the value of the property has gone up over that 5 years and you decide to sell. That’s taking the long road to explain that a trailer has value as a rental that is different from how an insurance company or a bank may look at it. In short it has earning potential value. It took some time to come up with these value definitions such as “earning potential value”.

I took the time to make these value definitions because I do not believe people understand that what Mr. Blackwell said and did are grounded in the same reality. Yes, the trailer is a trailer, yes, it is worthless in relation to the land, but yes it has rental value potential. It can be all of it and none of it at the very same time. It’s not Schrödinger’s cat as much as it is like a classic car: on paper it’s depreciated to zero, but over time it becomes a collectible where it is worth some money and grows. I have a 1990 Mazda Miata. On paper it’s worthless but I get offers on it all the time and could probably get $2500-$3000 but if it’s in an accident I’ll probably get $500 from the insurance company.  If I take it to a Miata meetup and put a “For Sale” sign on it I’ll probably get $3000. It’s all in how it’s earning potential is arrived at.

In my estimation Mr. Blackwell has done a great job in terms of understanding the value of trailers (mobile homes) on land. One reply on Facebook even emphasized how these types of properties are not close to other people and the value in that. Mr. Blackwell has made an investment in the land, the trailer on it, as well as upgrades and in a landlord-tenant contract – the responsibility to keep it habitable. He may deal with unforseen maintenance, non-paying tenants, and possible costs in wear and tear he will not recoup. Mr. Blackwell takes on more risks as a landlord than most people understand and with it comes rents.

The rents he is asking in my estimation are reasonable on so many levels starting with location but also including the emotional security of a tenant having a place to live, the beauty of having a place to live on land, and a landlord who understands the nuances of mobile homes. He is an enterprising entrepreneur with a product few understand but has great value in one simple feeling to a tenant: “Home Sweet Home”. Which leads me to Nick Bere’s Post about the Real Estate Market in Middle Tennessee – everyone’s desire to find a “Home Sweet Home”.

So on to Nick Beres’ post “HOW CRAZY IS THE REAL ESTATE MARKET GETTING IN MIDDLE TENNESSEE?” – Beres comments that he isn’t surprised at the outcome of the $1200 rental and that a tenant was found. He goes on to discuss how the demand is causing offers that exceed asking prices and the shares his own journey of relocation. He refocuses the post on the growth in areas surrounding downtown Nashville and how developers and individuals alike are moving further and further out and ultimately how those surrounding areas may be changing too.

I can argue that Nashville itself is changing. I moved here 14 years ago (has it been that long) from New York City. I had an apartment on the Queens / Brooklyn border and worked in Manhattan at a Fortune 100 financial services company. I came here because I was burned out, the cost of living was much less, and it seemed like a slower pace. Over the last 14 years I have seen Nashville become more and more like NYC. In fact I looked up my old apartment in NYC and looked like a much better deal for the money and experience than rentals in Nashville are currently. Even I had to move further out from Nashville after having lived in Hendersonville, East Nashville, and Madison over an 11 year time period. But where I am now is also changing.

I am now located near White House and Cross Plains. I see development happening at a rapid pace. I see a sign for houses in the low $300,000 and land that used to be beautiful and full of nature being bulldozed and prepared for what I call ‘cookie cutter houses’. I have rescued two turtles in the middle of the road this year (One was injusred with a cracked shell, he went to Walden’s Puddle) – a symptom and sign of rapid development where there was once just nature as far as the eye could see. Expansion outside a metro area is like radiation, it’s effects are unseen at first but felt over time.

Nick Beres is quite correct, the surrounding areas will fill up shortly. The question is: What will happen after that? 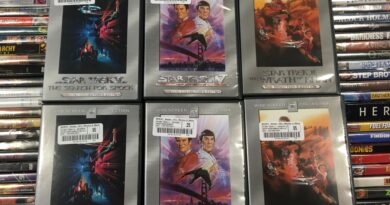 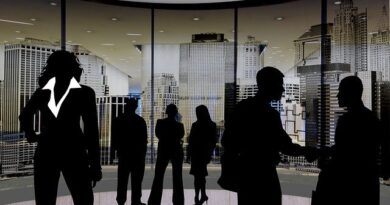 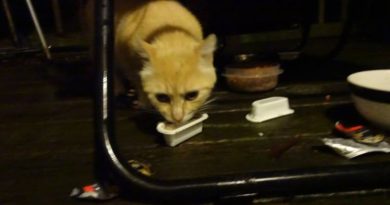