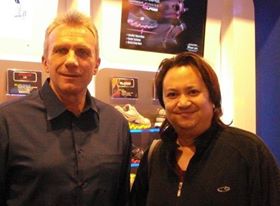 I was walking down the Santa Monica Promenade one day and people were beckoning passers-by into a store called ‘Skechers’. ‘Skechers’ sells shoes. When I came in, I was offered an opportunity to meet this man, Joe Montana. I had no clue who Joe Montana was until much later – but he was very nice to me and I think he understood I had no clue who he was.  Later I realized however, it was an amazing opportunity. He was so kind to me as I was so clueless towards him.