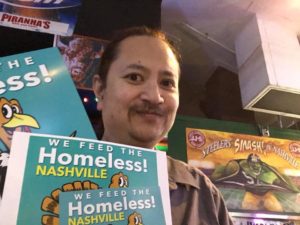 In 2010 I started flying to Santa Monica, California. Initially I travelled for a film shoot but I followed up in October 2010 to explore what I could do to give back to the city. I reached out to then-councilman Richard Bloom. Mr. Bloom helped me get connected to an opportunity to serve Thanksgiving dinner at the Santa Monica Civic Auditorium. I returned on many occasions to help the homeless in Los Angeles.

I retried from this kind of service when I adopted my daughter.  Adoption requires, among other things, a great deal of time and energy along with stability. It was a good several years of building the foundation of a family. As a single adoptive dad, I felt strongly that focusing on my family came first.

When re-emerged for service, I asked around for an event to volunteer at for Thanksgiving. I wanted something that was grass roots, meaningful, and genuine. I was referred to ‘Gobble Gobble Give’ days before Thanksgiving 2016. I wasn’t sure what to expect when I got there.

That morning it was very crazy but very organized. They assembled meal boxes using donated food. There must have been hundreds of people slicing meat, filling boxes, running bags, organizing runners, the list went on and on. I did everything from help move bags around, to running sacks of rolls to the stage, to restocking deserts. When I was done helping clean up it felt most satisfying as drivers were running these food boxes to many homeless people right where they were at. It wasn’t the kind of event that makes the homeless come to them – it was the type of effort where they went to where the homeless were.

The effort is genuine, the help is real, and the impact is amazing. The thing generally runs like clockwork – like a huge assembly line / conveyer. No one feels left out and in the end, everyone makes a difference. This event can’t have too many helpers.

This is why I am serving again in a few days. All they are asking is that folks show up. There are a list of needs such as bringing a family-size dish cooked, bottle water, soda, blankets, clothes, toiletries, etc. But in the end if you can’t bring that, you just sow up and help package meals or deliver dinners.

I am very very aware of the ‘industry’ built around ‘the homeless’ of Nashville and the varying jockeying that goes on by non profits when it comes to funding, recognition, and showing numbers. I spent years helping run non-profits and it’s a very lucrative business. This is one of only two efforts I know of that aren’t like that – the other is Steven Allen Young’s Home Street Home Ministries. In the end, Gobble Gobble Give, by my estimation is well worth serving at on Thanksgiving morning. 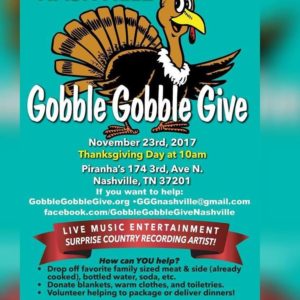 If you want to help: