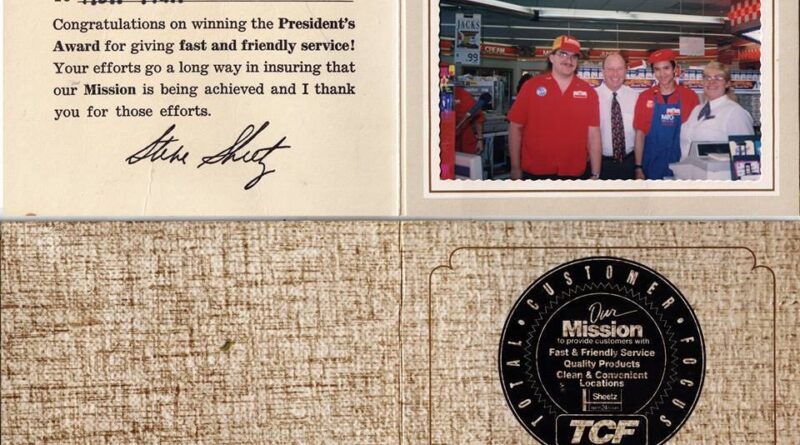 In the early 1990’s I got a job at the convenience store Sheetz. I worked at a location off Second and Forester St. in Harrisburg, PA and off Carlisle Pike and 114. It was a time unlike any other in my life.

I just barely remember interviewing. I recall there was an employee there that really wanted to see me hired but I don’t recall his name. All I remember was that he was African American and incredibly kind & supportive. But even his support wasn’t enough for the rocky road ahead.

I wasn’t very fit for the inner city at that time in my life. I had what could only be considered a troubled time at Store 112 in Harrisburg, PA. It was rough but I do remember some good times. There was an employee named Ryan who held a record for number of hours worked consecutively. I came close at 22 or so but I think he worked 24 straight. There was Tasha who I remember worked pretty hard. I remember two sisters, Erica and Eunieka (Nieka) Simms who were vrey funny.Barry was a neat guy with a lot of personality. Shabonna Springs would make my breakfast Schmuffins, John Decker, a manager who taught me how to clean my glasses, Kimmie, a manager who was pretty high energy, and Doug – a manager who said to me once that the things that mattered were the people he loved, the people who loved him, that he loved God and God loved him.

I ended up doing shifts at Store 114 in Mechanicsburg, PA because Harrisburg just wasn’t a good fit at the time. I was working through a lot so I ended up of all things doing dual shifts between the two stores. At the Mechanicsburg store I worked for a woman named Peggy and at that time got to meet Steve Sheetz, one of the owners. There was a woman we all called ‘Mom’ who made ‘Gary’s sub’ and another woman named Terri Miller who always kept things moving.

It was a crazy time in my life, working 3rd shift in the city, then commuting to the suburbs for 1st shift, often sleeping a little bit in between. I lived within walking distance of the 3rd shift store, so it wasn’t all as crazy as it could have been. But it was still a lot of work.

By the end of the experience though I had learned how to get along in the inner city and in the suburbs. It was a wild ride to say the least. I have never forgotten a few things:

A lot of life has happened since 1995 when I worked there. I lived in NYC as the towers fell during 9/11, travelled the world working with AIDS orphans in Africa, I co-led an outreach to inner city kids in Nashville, worked in the music industry in NYC and Nashville, legally adopted an african american girl, and started in animal rescue. I also run my own company now. It’s been a while since I looked back at this time in my life but I wouldn’t trade it for anything in the world.

When I go to Burger King, I ask for onions on my Croissandwich and a pack of ketchup. It’s the closest to how I had my Schmuffins made in the 1990’s. Memories. This kind of time only comes once in your life. I can still see crazy Ryan smiling knowing how clueless I was, I can feel Doug’s compassion and see Shabonna’s smile. I was so in over my head. But I wouldn’t trade it for anything in the world. It was 1990 something, and some pretty good memories.